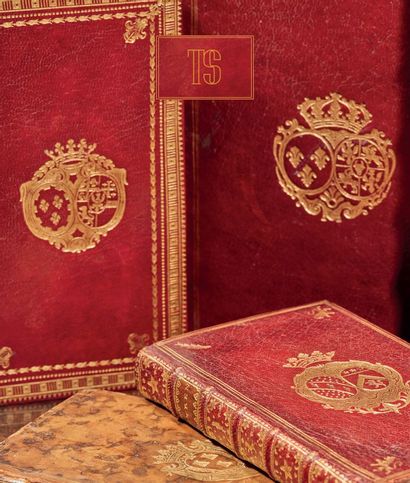 BOOKS & MANUSCRITS : Library of an eclectic and diverse bibliophile

Eclecticism, attitude of someone who is interested in all fields, or, within a field, in all subjects.

The field, here, is the book. It is vast. Yet everything is there.

First the Middle Ages on a small handwritten hour book. Then the birth of printing: incunabula as rare as Vincentius GUIDO's Margarita or the first translation of the first bestseller, The Ship of Fools, Stulifera navis, by Sebastian BRANT illustrated by Albrecht DÜRER. Other classics that mark the expansion of the book in the 16th century: a Légende dorée printed in Lyon in 1518, the chronicles of COMMINES, Le roman de la rose by LLORIS and MEUNG, an exceptional first edition of Nicolas MACHIAVEL, the Tiers livre by RABELAIS... The great century. The first editions of the one who gave his name to our language: MOLIERE, followed by RACINE and CORNEILLE.

Century of knowledge and discoveries, the exceptional sum of DIDEROT and ALEMBERT is present, the new plants of J.M. Cels by REDOUTE, the encyclopedia of music of KIRCHER, travelogues or studies of CHAMPLAIN, COOK, PREVOST d'EXILES, BELLIN, DENON, atlases like the Theater of the world of G. and J. BLAEU. A collection of bindings with the coat of arms of Louis XIII to Napoleon I through the Pompadour, the great Colbert and Murat.

The XIXth century and its novels : a shipment of BALZAC on Vautrin, the claw of FLAUBERT on Salammbô, that of HUGO on the Rhine, MUSSET, LAMARTINE...

Finally the XXth with mosaic bindings, incised leathers, and great illustrated books : the Fire of BARBUSSE or My brother Yves of LOTI by RENEFER, The divine comedy of DANTE by DALI with an original drawing...

and the morning of the sale from 11am to 12pm