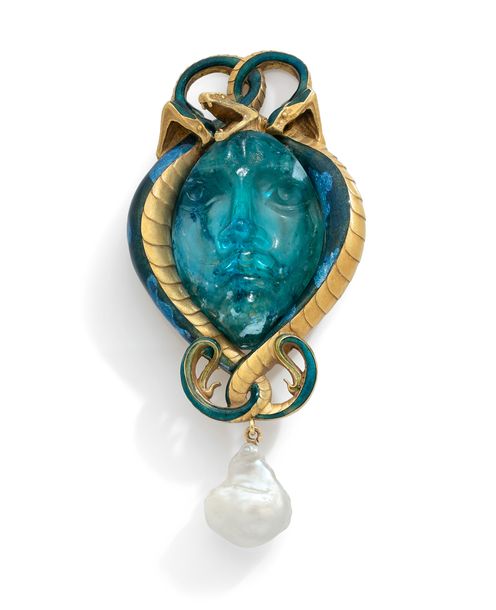 The jewelry-maker was one of the great names of first Art Nouveau and then Art Deco, whose glass creations became increasingly prevalent after 1900.

"I didn't know of any jewelry designers, and at last here we have one!" The compliment from Alphonse Fouquet—Georges Fouquet's father and founder of the eponymous jewelry store—was addressed to René Lalique. This was in 1884 when Lalique made his first public appearance at the National Exhibition of Industrial Arts, which was held to coincide with the presentation of the Crown Diamonds in the Salle des États at the Louvre. He was only 24, and a long and brilliant career lay ahead of him. Although this pendant is not dated, it is a unique piece and, like the Cluny vase, is made of contrasting materials. The latter is in bronze and glass, while the jewelry piece here is in yellow gold, enamel with silver foil inclusions and repolished pâte de cristal made with the lost wax technique. Not forgetting one of the baroque pearls so loved by the Renaissance-inspired jeweler, along with enamel. The motifs combine serpents with the face of Medusa. A monster from Greek mythology whose hair consisted of venomous snakes, she had the power to turn anyone who looked at her into stone. An important detail: this piece belonged to Elizabeth Taylor. The actress said there were only three great loves in her life: Mike Todd, Richard Burton and jewelry...
Also up for auction is a pâte de verre vase by Henry Cros decorated with figures picking apples in a bed of lilies (€ 10,000 / 12,000), a set made up of jewelry and hammered silver forms by Jean Després, including a modernist necklace of c. 1970 (€ 6,000 / 8,000), and a lamp by the Établissements Gallé (1904-1936) known as the "Orange Lamp", made of triple-layered acid-etched glass mounted in bronze with chased plant ornaments. Only a few examples are known to date (one being in the Nitori Museum of Art in Otaru, Japan) and with its spectacular appearance, this piece rivals the "Wisteria" lamp. € 60,000 / 80,000 will be needed to carry it off.
Continuer sans accepter >