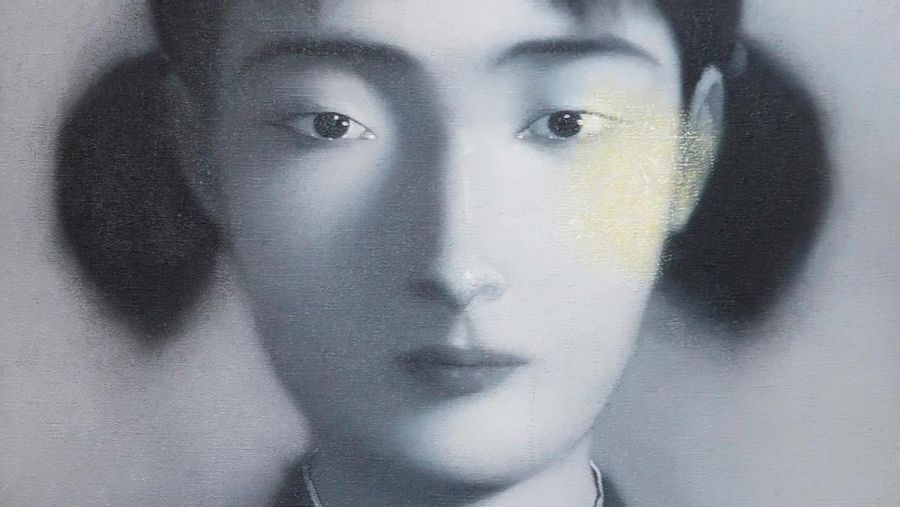 Like a quest for identity, her anonymous portraits revive a memory that dissolved in the Chinese Cultural Revolution.

Her monochrome paintings gained world acclaim at the 1995 Venice Biennale.

With her fixed gaze, impassive face and frozen frontality, this girl painted by Zhang Xiaogang epitomizes a whole generation: the children of the Chinese Cultural Revolution. From 1993, the artist gave them a voice by painting disembodied portraits in which features as calm as water, as she says, conceal great emotional distress. They are based on black and white family photographs that had escaped the flames at a time when Mao Zedong's Little Red Book, brandished in Tiananmen Square on August 18, 1966, had been erected as the supreme value. The color of the Chinese Communist Party—which also evokes blood—and the green of the uniforms sometimes burst into the portraits’ gray monochrome. In an ironic twist, these powerful symbols became the critical manifesto of an era.

On December 22, 1968, the regime’s official newspaper decreed: "It is indispensable for educated young people go out into the countryside to be re-educated by poor and middle-poor peasants.” Being just a child at the time, Zhang Xiaogang was not affected by the measure, which targeted boys and girls who had completed high school, secondary school or university. Applied for over 10 years, it uprooted nearly 17 million young people, tore them away from their families and forced them to live in harsh conditions. They are now trying to rebuild their lives.

Zhang Xiaogang, who was fortunate enough to study at the Sichuan Academy of Fine Arts, from which she graduated in 1982, seized upon this shattered collective memory by starting a series of portraits called "Bloodline: Big Family". It was an eye-opener. The "lost generation" instantly identified with these works, which surpassed the power of words. The world discovered them in 1995 at the Venice Biennale. The internationally renowned painter is now considered one of contemporary China’s leading artists, to the point where prices for her paintings have gone through the roof in the past 10 years. They are scarce on the French market.